Amundi announces the appointment of Nicolas Calcoen as Head of Strategy, Finance and Control Division. Following a proposal from Valérie Baudson, CEO of Amundi, the Board has also appointed Nicolas as Deputy CEO of Amundi.

Bernard de Wit has been confirmed as Executive Senior Manager and appointed Head of Governance and General Secretary.

Cinzia Tagliabue, CEO of Amundi in Italy, has also been appointed as Head of International Partner Networks Division.

Benoît Tassou has been appointed as Head of French Partner Networks Division.

These appointments will take effect from 1st April 2022.

Nicolas Calcoen has been working in the investment industry since 2010 and has been with the Group since that date. Before joining Amundi in 2010 as Head of Strategy, Nicolas held various positions in the French Ministry of Finance and at the International Monetary Fund (Washington, DC).

Nicolas Calcoen graduated from the Ecole Nationale d’Administration (ENA) and the Institut d’Etudes Politiques in Paris and holds a DEA post-graduate diploma in Economics and International Finance.

Bernard de Wit was Director of Support and Business Development of Amundi since 2013. Prior to this, he was Director of Risks of Amundi since 2010. Before joining Amundi, he was Financial Director for Crédit Agricole’s International Retail Banking network having previously held the position of Deputy Director of International Development. From 1992-2001, he worked in the Banks-Finance sector at KPMG Peat Marwick in Paris. Bernard de Wit began his career at Fortis (BNPP today) then held the position of Head of Financial Control and then Director of Finance at the Loiret regional branch headquarters of Crédit Agricole.

Cinzia was CEO of Amundi in Italy since 2017 and Deputy Head of Partner Networks division of Amundi & a General Management Committee member since 2020. She joined Pioneer Investments in 2001 as CEO of Italy and Head of Western Europe & Latin America. She has over 30 years’ experience in financial services with UniCredit focusing both in investment and distribution. Cinzia has been working in the investment industry since 1980. She has been a member of the Capital Italia SICAV Board and the Aviva Board.

Before joining Amundi, Benoît Tassou was Deputy Chief Executive Officer of the Crédit Agricole Centre-Est Regional Bank. Prior to that, he was Head of Sales for the Crédit Agricole Group networks at Amundi. Benoit started his career at LCL where he became Regional Director of Corporate Banking in 2007 and then Secretary General of Corporate Banking before being appointed Network Director in 2014.

Jean-Jacques Barbéris, Head of the Institutional and Corporate Clients Division and ESG

He has been working in the investment industry since 2010 and has been with the Group since that date. Before joining Amundi in 2010 as Head of Strategy, Nicolas held various positions in the[...] 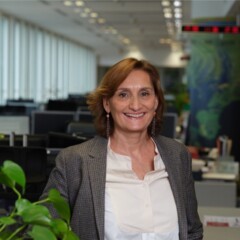 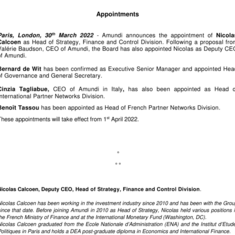